Banking in Spain has seen big changes in recent years – but that’s not the end of it, as banks face further consolidation and new competitors

On first arriving to work in Madrid in the early 90’s, it was impossible not to be struck by the abundance of bars.  It was said that Spain had more than the rest of the European Union put together – true or not, it certainly felt like it.

But it wasn’t just bars you would come across as you walked around Spanish cities – banks were also everywhere.   This was the time of rapid economic growth.  House prices were booming, and banks cheerfully handed out cheap mortgages to win new customers.  And in the pre-internet age, the quickest way for them to grow their business was to open branches.

The British tried to get in on the action – Lloyds, Barclays and Nat West all had branch networks. None of them do now.  Lloyds sold out in 2014 before reaching its 100th anniversary in Spain, while Barclays, which at one point had nearly 600 branches, sold its network to Caixabank in 2015.  Barclays had for many years made decent profits, but competition, the economic environment and some bad decisions led to large losses, and the group pulled out. 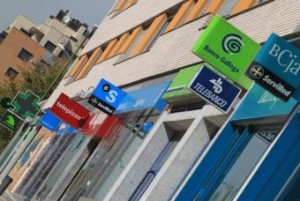 A lot has changed in Spanish banking since then.  Consolidation has been going on over the last three decades, but the recent banking crisis and property crash have accelerated the trend – five years ago there were 55 banking groups: now there are just 14.  And there’s more change to come.   Spain is still over-banked, with some 70 bank branches per 100,000 adult residents, almost double the ratio in France and nearly three times the UK figure.  Not surprisingly, branches are being closed faster than ever as these mergers shake out.  Empty ex-bank premises are a common sight all over Madrid. 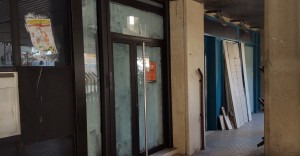 While the sector deals with over-capacity, the other problems faced by Spanish banks are similar to those in the UK and elsewhere.  Heavier regulation – whether that means having to shore up capital or employing bigger and more expensive compliance teams – is squeezing profits already hit by lack of credit demand and low interest rates.

The bank bail-outs, mortgage repossessions and the fallout of corruption in many of the formerly publicly-run savings banks – cajas de ahorro – has taken the public image of banks to a low point.

Keeping investors happy is also proving to be a challenge. None of the big three have a Return on Equity above their probable cost of capital – Santander at 7.4% leads the way, with BBVA at 5.4% and Caixabank at 4.1%.  Of the quoted banks, only the much smaller Bankinter has a ROE in double figures.

Organic measures – branch closures and cutting costs – will not be enough to get returns back to acceptable levels.  And with both the Bank of Spain and the Central European Bank dropping none- too-subtle hints about the need for consolidation, it’s likely that 2016 will see further mergers.  Some commentators expect the big three to each pair off with one of the next trio in the ranking – Bankia, Sabadell and Popular.  That would put a large chunk of the market in the hands of just three institutions, leaving eight medium size entities to either look for a new owner or for partners among themselves.

Although market conditions are much tougher than in the past – mortgage approvals, for instance, are running at just a fifth of the rate of the boom years – this consolidation will at least bring some relief, as what business there is will be shared out among fewer competitors.   Yet the Spanish banks cannot afford to be complacent – in addition to the harsh environment and the struggle to give investors an adequate return, a new wave of competition is coming in the shape of the Financial Technology start-ups – the Fintechs. 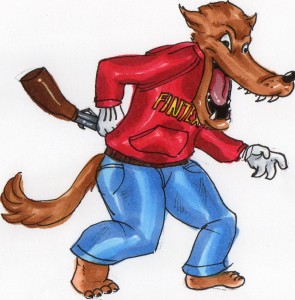 The Fintechs are on their way, and they want some of what the banks have.

Competition from non-banks is not new – Foreign exchange and money transfer business have long been under attack by companies such as UK’s HIFX.  But now the new wave of Fintechs are aiming at banks’ other core activities, such as lending, mobile payments and even wealth management.   And other companies, not particularly technological, are muscling in on SME lending, matching borrowers with institutional investors, either directly or through investment funds.

In Spain it’s probably true to say that the Fintechs haven’t made much of a dent in the banks’ income – yet.  Spanish P2P lender Comunitae has arranged finance of just €25 million since it started in 2009, with a live lending book of €3.8 million. The newer Barcelona-based Arboribus has set-up just €4.6 million worth of loans, with a live portfolio of €2.8 million.

These are hardly numbers to worry the banks, especially since much of this lending is to customers that don’t really interest them.  Even so, the knowledge that hundreds of small start-ups are looking for ways to nibble away at the most profitable parts of their business should give them food for thought.

And competition may not just come from the small technological start-ups – imagine how the consumer loan market would be shaken up if Amazon or Ebay decided to get serious about offering loans directly to their customers.

The big Spanish banks are aware of the potential threat, and are each dealing with it in their own way.  Santander has partnered with P2P lender Funding Circle, set up a $100 million Fintech fund, invested directly in mobile payments start-ups such as iZettle and MyCheck , and formed a Joint Venture with UK-based Monitise to launch a “fintech venture builder”.

BBVA runs a similar fund, and its direct investments include a 29.5% stake in Atom, a UK based online bank due to start trading in 2016.  It fully owns Simple, an Oregon-based online bank.  It also organizes BBVA Open Talent, a competition to find the most innovative and transformational fintech start-ups.

Caixabank, despite having the most sunk in bricks and mortar with 5,800 branches, has a reasonable reputation for technology and prefers to innovate internally.  Several subsidiaries look at innovation in different areas, although the bank still works with small start-ups on ideas that it can use in its business.

But being aware that the bad guys are on their way doesn’t mean you will stop them taking away a good slice of your business.   And even without the Fintech competition, technology will transform banking.   Ex-Barclays CEO Antony Jenkins thinks that what he terms the “Uber moment” for banking could mean headcount reduction of as much as 50% in the big banks over the next ten years.   If what we’ve seen over the last few years is anything to go by, that looks equally applicable in Spain.

So more mergers and branch closures in Spain are inevitable, and the banks are facing difficult times.   But don’t fear for their immediate demise.  With their conservative cultures, they will struggle to be disruptive innovators themselves, but they have financial muscle to develop technology and the smarter ones will benefit from innovation.  They can also afford to buy up promising Fintechs, and many of the less promising ones will fall by the wayside.

Expect the banking world in Spain to look quite different in five years’ time.  For foreign companies looking for banking partners, there will be a narrower choice – a few Spanish giants and a handful of International Banks, with the latter focusing mainly on serving the larger Multinationals.   But it’s also likely that more companies will be able to turn to Fintechs to process credit card payments, finance their receivables or to ask for a loan.

Of the banks that remain, some are more geared up than others to deal with the needs of international companies new to the Spanish market.   A good bank can be an important partner in those early days, so for companies looking to open accounts, it’s worth taking time to seek out a bank that will provide the right level of support.